Please note that this site will not provide you a “complete” walkthrough of TRIGLAV (smartphone app).

Trap combinations of “Fire emitted from the walls” and “Gears moving along the rail”. You’d rather be aware of the gears in this floor.

The key is in the treasure box.

Use “Jail Break Tool” which you can get in 6F, and fight with BUK the prisoner. He may be a bit tough enemy at the first time, so you can put him aside until you get strong enough.

Bring the item to the man fishing(?) in 10F. Just remember where it was and bring it later, if you are full of items.

Something is written on a piece of paper, meaning that there is a hidden path marked on the map.
(If you can read Japanese, it says “Invisible Path”.)

You’ll encounter “Man-eater chests” from this floor. Also, you’ll have to be careful around bonfires because you may be damaged if you keep staying in it.

Step on two of the floor switches, and the fence disappears, which surrounds the treasure box with the key inside. Boss will appear at the same time.

Inside the treasure box beyond the secret path. Use it in 6F’s jail. (See 6F’s Boss)

Wizard-typed monster. Hides during moving, only with the red light emitting.

Attack him when he gets close to you, and you’ll be able to beat him easily.
(He doesn’t have long range attacks nor automatic recoveries.)

You’ll meet these types of monsters from now on.

Mimics begins to appear around on this floor. (Perhaps, from the lower floor.)
Defeat it, and you’ll get an item.

There is an item shop on this floor, but be careful since you may be attacked during trading. When you are under attack, the screen blinks in red. You’d better trade some items after you beat the monsters around you.

Rushes straight to you to attack, and takes a breath. He just repeats those two moves again and again. If you are equipped with good armors you got in the previous floors, his rush attack will not be a threat.

If there is some kind of an obstacle between you and THE BEEFY, he often changes his way and runs somewhere else.

This floor is the floor which beginners should pay much of an attention.

WILL O’ WISP, the boss of this floor, is going to chase you around in a slow speed, but you will not be able to win for the first time.

Just escape from WILL O’ WISP and search for the key, which is inside the treasure box somewhere around the floor. (You’ll have to attack the treasure box, since it’s frozen.)

It may be a restless floor, but don’t be afraid. You’ll lose only a little bit of vitality when passing through the boss, so just be calm even when you are in the dead-end path.

Get from the treasure box, somewhere in the floor. You’ll need this item in a couple of places, so remember one of the scarabs is in this floor.

Just chases the player with no attacking, but you’ll lose some vitality when in contact.
Three WILL O’ WISPS appear when you come back after you reach 30 ~ 40 floors.
(I don’t know the details.)

Tenth floor is like a marketplace, and many traders and quest clients are here. Monsters do not appear in this floor, so you can take your time to look around for some items.

The “red big treasure box” appears here for the first time. This is a warehouse, which you can stock items. (Maximum of 15 items at first. You need to pay money for extra stocks.)

These red treasure boxes are in several places in this game. Regardless of locations, contents are all the same, so you can store and take out items wherever you want to. 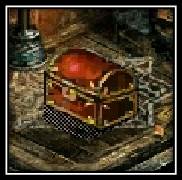 ↑Store items that you don’t want to get rid of.