Please note that this site will not provide you a “complete” walkthrough of TRIGLAV (smartphone app).

No floor enemies, except the boss.

Step on the floor switch in order as written in a piece of paper at the center of the floor, and the boss will appear. Defeat it, and you’ll get a key.

Moves very slowly, with no long range attacks. You can easily recover your vitality, just by getting away from it.

Nothing particular in this floor. There is a red floor which you need to install “Warp Pad”, but I think you cannot do anything but ignore at this point. 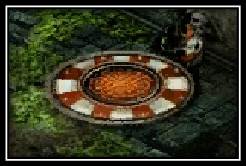 ↑Warp zone will be brightened after installation of “Warp Pad”.

Both his face and hand cannot move from initial place, so you can just move away from them to recover your vitality.

Move through many rooms via warp pads. This floor is a bit difficult, since you may suddenly be transferred to the boss’s room. You can use two of the warp pads, even if the boss is still alive, so you can leave the room if you are not ready for the battle.

Some wizard-typed enemies can come and go between the rooms, so it would be safer to kill all enemies before moving on to the next room.

The map of this floor and destination of each warp pads are shown in the article below.

You’ll need it later on.

Wizard-typed boss. Attacks by lightning shot periodically, but you can avoid it by moving around.

Two mages are on both sides of the boss. You’d better knock them down first.

Round rock comes rolling along the track. You’ll be considerably damaged by them, so watch out!

There’s no boss in this floor, but the “ORC” near the key treasure box is a bit strong.

There are gold and silver treasure boxes besides key treasure box, but they are just a gimmick. If you get close to those treasure boxes, the rock behind them will begin rolling towards you.

You’ll need it later on.

A man on the right side requests for two material items for ring synthesis. Four types of “Jewel part” and four types of “Ring part” exists in this game, enabling you to synthesize 16 different items.