How you build, set, and upgrade your tower will be a big point in this game. If you’ve unlocked all the towers and upgraded some of it, you’ll be able to plan several strategies.

In this page, I’m going to write about some of the tips to defend your base.

Strategies near Portal and Base

“First” or “Strong” near Portal

“First” or “Weak” near Base

About half of “Air” built should be set “Strong” to aim for the ignition chance. If the enemy is ignited, “Air” will change the target to the next enemy.

The effect of “Ignition” (by “Air”) and “Poison” (by “Venom”) is quite similar from the viewpoint of “damaging enemy continuously”, but the way of its calculation differs;

Ignition damage dependes on the ratio of the enemy’s maximum health, so this is very effective to enemies especially in final stages with high healths.
If you are suffering from air enemies, “Strong” settings will help you for sure.

And again, set “Strong” near portal, and set “First” near your base. 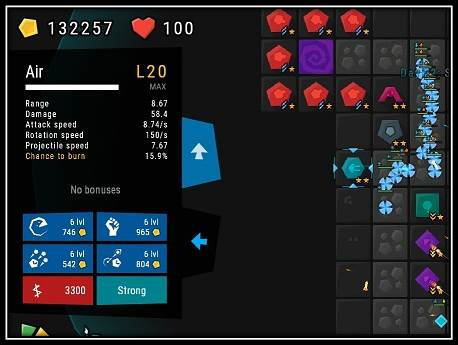 Ignite every one of air enemies by “Strong” setting.

Postscripted on August, 2019
This “depending on the ratio of maximum health” system is abolished in infinitode 2.

“Freezing” or “Blast” on Platforms with Range Bonus

If you build towers shooting bullets on platforms with range bonuses, they can aim more farther but attacking powers and frequencies do not change.

On the contrary, “Freezing” and “Blast” targets all enemies in the range. That is, widening of the range connects directly to the increase of total attacking power.
Building “Blast” will be more preferred.

Concentrated Attack by “Blast” and “Cannon”

Build “Blast” and “Cannon” (three or more of them each) near the portal. Stop enemies’ moves by “Blast” as soon as they appear, and attack them with explosion shots by “Cannon”.

“Cannon” damages all enemies near the target, so make a hangout place near the portal, and you’ll be able to reduce many enemies’ health at once.

Make sure not to upgrade the range of “Cannon” , since we want it to attack only near the portal. 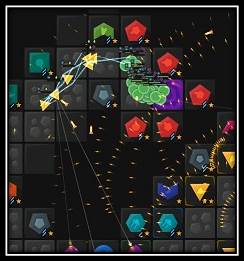 If you set “Strong” on one (or more) of the “Missile”, perhaps it may attack this hangout place.