I’ll be uploading some walkthrough videos.

Here I’m going to introduce my strategies for Infinitode 2.

This is for people who have already cleared stage 5.8, and also for those whose research is almost finished.

Strategies may change depending on several factors (some of them shown below), but I’d be glad if this page’s information will help you.

You can get extra coins per wave by installing BOUNTY. It will be helpful for upgrading towers, so install them as much as you can if you have some extra coins and platforms.

The wider the map, the more useful the BOUNTY.

If there are extra coins left after installing towers to defend the base, try to install BOUNTY as much as you can.

Having many BOUNTIES at the beginning of the game will help you later on.

Installing BOUNTIES on isolated platforms will be the best, since towers around BOUNTIES cannot gain coins by defeating enemies.

But there are stages with no isolated platforms.

In this case, installing “Freezing” or other towers with less attacking strength around BOUNTY will be good.

If the battle is on track, keep at least 2500 coins with you and the bonus of BOUNTY will be maximized.

Sell BOUNTY before the game is over

When there is less chance to keep continuing the game, it would be better to sell BOUNTY than doing nothing.

Use your remaining coins to upgrading towers or installing other modifiers.

“Snowball”, which is the Lv10 ability of the tower “Freezing”, forms a snowball when there are no enemies in their range. This snowball rolls toward the portal and freezes an enemy for a few seconds when it hits them.

When the map is wide and long enough, install several Freezings near the base, and you can create many snowballs to block the enemy wave. 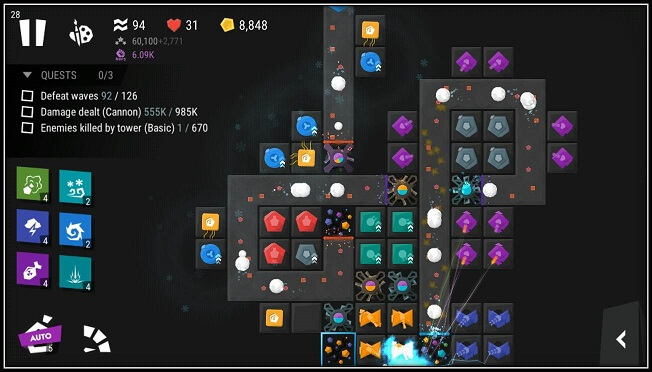 Six abilities I often use are shown below.

I didn’t choose the following abilities for some reasons.

Number of thunder is limited. Of course it’s powerful, but is inferior to waves with a bunch of enemies.

Attacks the whole map, but some enemies pass through the bullets.

Attacks the toughest enemy, which is often around portal. It is not useful when your base is at risk.

Although attacking frequency and duration time is superior, it only attacks 3 enemies at a time.

Some tips for where to use abilities.

How to use “Smoke bomb”

Using this ability at the turning point where “Blast” is installed will be effective. 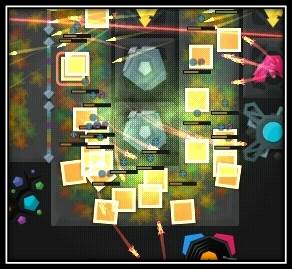 How to use “LOIC”

Needless to say, using this ability in straight vertical roads will be effective.

Besides that, this is also useful when the whole map is vertically long like in stage 5.1 and 5.3.

Install “Blast” at the end of the straight line, and more enemies will be involved in LOIC.

If you fail to tap the center of the road, enemies on one side of the road remains alive. Just expand the map when you use this ability to avoid mistouching.

I often use two abilities at a same time. Here are some examples.

As written above, “Firestorm” cancels the slowdown effect of “Freezing” or “Flamethrower (Cold fire)”. By stopping enemies’ moves with “Blizzard”, you can disable the slowdown cancel effect.